The technique itself is nothing new. Oil crews across the world have been schooled on its simple principles for generations: Identify aging, low-output wells and hit them with a blast of sand and water to bolster the flow of crude. The idea originated somewhere in the plains of the American Midwest, back in the 1950s.

But as today’s engineers start applying the procedure to the horizontal wells that went up during the fracking boom that swept across U.S. shale fields over the past decade, something more powerful, more financially rewarding is happening.

The short life span of these wells, long thought to be perhaps the single biggest weakness of the shale industry, is being stretched out. Early evidence of the effects of restimulation suggests that the fields could actually contain enough reserves to last about 50 years, according to a calculation based on Wood Mackenzie Ltd and ITG Investment Research data. 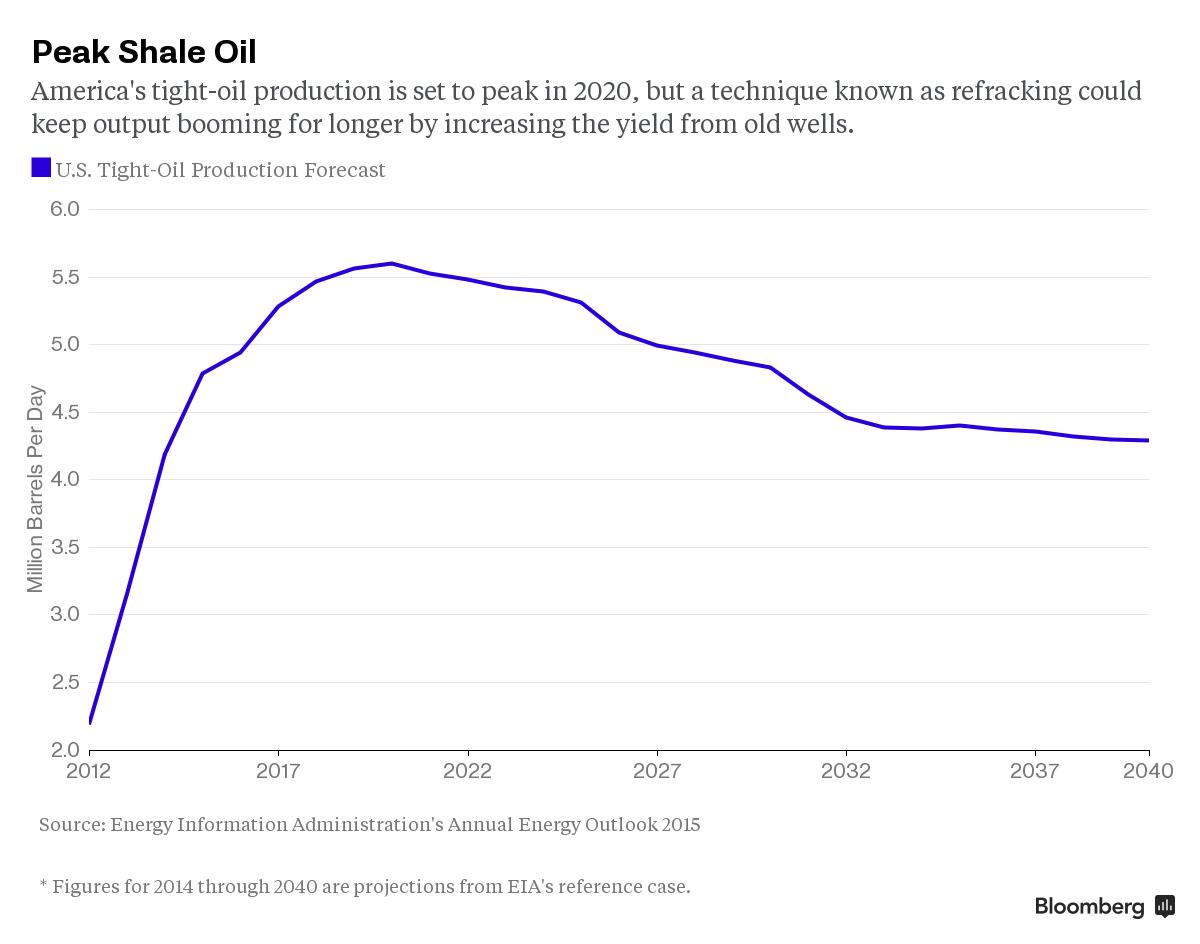 America’s tight-oil production is set to peak in 2020, based on U.S. forecasts, but a technique known as refracking could keep output booming for longer by increasing the yield from old wells.

If the word fracking has carved out a spot in the lexicon of Americans as the nation advances toward energy independence, then refracking, as roughnecks have begun calling it, could be next. And for an industry that has been hammered by the 50 percent drop in crude prices over the past year, the finding on the technique’s potential — at a fraction of the cost of the initial well — provides a much-needed sense of hope.

The risks abound — from inadvertently siphoning oil from an adjacent well to ruining a whole reservoir — and the sample size so far isn’t big enough to be conclusive, but oil giants like Marathon Oil Corp. and ConocoPhillips aren’t waiting to incorporate refracking into their shale operations.

Mike Vincent, a well-completion engineer who teaches the technique to industry workers, said he’s been overwhelmed by the sudden interest in the class. He even had to abandon plans he had been making to spend a week fly-fishing in the Rocky Mountains over the summer. “I’m booked every week teaching refrack classes out to November,” said Vincent, who runs a Denver-based firm called Insight Consulting. “It’s amazing how much passion there is.”

Years of working on traditional wells have shown that they can be restimulated multiple times, Vincent said. In the industry’s lingo, a well that has been blasted five times is a “Cinco de Fraco.” Eight times gets you an “Octofrac.” When done right, the procedure not only boosts the flow of crude, but can also increase the estimate of reserves held in the well. Vincent said it’s common to see oil recovery climb 60 percent or more.

“I’ve seen a well get 10 fracs through the same perfs, and it appears that we’re adding reserves every time,” he said.

A study by Bloomberg Intelligence of about 80 wells that were originally tapped in North Dakota’s Bakken formation in 2008 or 2009 and then refracked again years later shows a clear pickup in output. The wells on average produced more than 30 percent more oil in the month after the refrack than they did after the original completion, according to analysts William Foiles and Peter Pulikkan.

While these kinds of increases are important to traditional drillers, they’re crucial in the shale industry, where output can start falling within days of a well being tapped. Companies such as EOG Resources Inc., the largest shale oil producer, have long acknowledged that they generally are recovering just a small fraction of the oil and gas in place in the biggest and most prolific reservoirs.

“We’ve seen big changes in completion technology, and it looks like that’s only going to continue,” said R.T. Dukes, an upstream analyst at Wood Mackenzie in Houston. He estimates that there are about 100,000 horizontal wells that could be restimulated. “At that point, it becomes significant.”

So far, a few hundred refracks of shale wells have been done in the U.S., a figure that Vincent predicts will grow to at least 3,000 over the next two years. And IHS Inc. forecasts they will come to make up as much as 11 percent of all hydraulic fracturing activity in the country by 2020.

The process to refrack a well isn’t that different than the original frac. Water, sand and other chemicals are pushed down the well, beyond the previously tapped areas, to create new fissures or to re-open clefts in the rocks that have closed.

It’s easy for things to go wrong. If poorly executed, the maneuver could take oil from the producing zones of other wells, or worse yet, ruin a reservoir. Then there’s the concern that some industry analysts have that a refrack only accelerates the flow without increasing the actual total output over the life of the well. EOG is among the drillers that remain reluctant to start using the procedure.

Refracking is still in its “early days,” said Robin Mann, global leader of the resource evaluation and advisory group in Deloitte LLP’s Houston office. “There’s always a risk you’re going to damage the reservoir or create interference between wells.”

But in an industry that is desperately trying to cut expenses after oil fell below $60 a barrel from over $100 a year ago, the technique’s low cost has great appeal. Because the first step in the fracking process is already done — the drilling of the wellbore — the outlay is just a fraction of the $8 million or so it costs to tap a new well.

Sanchez Energy Corp., a Houston-based oil producer, expects to spend between $1 million to $1.5 million per well when it starts carrying out its first horizontal-well refracks later this year. The extra oil and gas it will pull out from each one as a result, meanwhile, could have a value, when measured in today’s dollars, of as much as $2.5 million, according to Chris Heinson, the company’s senior vice president and chief operating officer.

“It’s a compelling prize,” Heinson said in an interview last month. “There were a large number of wells out there that we know were originally completed with something that we could do better today. That’s really exciting.”